Our last visit at  Capilano Suspension Bridge started with an infusion of Canadian History. We saw again the beautiful collection of totem poles made by First Nations of British Columbia, Canada when passing along the Story Center, Kia'palano and the Totem Park. We read in the Story Center that this Native Theme was added after 1930's, when Mac MacEachran invited First Nations to place their story poles in the Capilano Park.  I really like to spend time looking at these colorful poles with finely chiseled features, reading the nearby plaques and thinking about the meaning behind them. This time I had with me the photo camera and  I will let you see by yourself  few pictures taken in our tour.


The Totem Park has an welcome log with "Capilano Suspension Bridge" carved on it and features authentic BC Totem Poles. The plaque that give general information about the native Kia'palano', is proclaiming them as "BC's earliest human connection to nature".

Similar with The Indian Totem Poles of Brockton Point and Coast Salish Gateways from The Indian Village of Stanley Park , each of them tells fascinating stories .

The following text is from plaque at the totem pole display in Vancouver's Capilano Suspension Bridge Park:
" Poles are carved out of one tree and are accented with pieces of copper, shells, or, in this case, real human hair. The pole tells the story of an abandoned blind man saved from starvation by a bear who brought him fish to eat. The blind man's descendents became known as the Bear Clan."

Text from the plaque at the totem pole display:
"Ravens frequently appear in First Nations' stories and are often featured on poles.
This pole tells the story of a selfish chief who long ago had stolen the sun, moon, and starts and was keeping them in a box in his home. Raven, being a trickster and lover of shiny things, swooped in, grabbed the sun in his beak and dropped it in the sky, returning light to the world."

The plaque at the totem pole display reads as follows:

"All poles tell stories. The story, depicted in this pole tells of a family of fishermen who dramatically rescued a wolf drowning in the ocean. From that time on the wolf remained the loyal companion and guardian to the family who became known to their people as the Wolf Family."

4. The Honour of the Salmon Pole

The following text is from the plaque beside at the totem pole:

"This pole tells the story of how the eagle helped a blind man by fishing for him.
The blind man's family then became known as the Eagle Family. Poles are the way that people of First Nations passed on legends such as this, which traditionally took weeks to tell at Potlatch feasts."


" This pole tells the story of a village that was terrorized by a giant cannibal. The cannibal was finally defeated and burned, but the villagers' triumph was short-lived when out of the ashes of the giant, mosquitoes were born. Like the cannibal, they take tiny bites of all humans. "


" This Pole was raised in 1989 to commemorate our 100th anniversary. The bottom figure is Sky Brother. His arms are outstreched in welcome. Traditionally a Sky Brother figure without arms is a warning not to  proceed any further because danger lies ahead. Above Sky Brother is the killer whale, above that the grizzly bear and then finally, the raven is at the top."

Interesting seems that the "Pole carving tradition at Capilano continues"  at the Kia'palano' First Nations' Cultural Center (as you can read on next plaque).

"In June 1993, native carvers James Lewis and Wayne Carluck began work on a series of Totem Poles for Capilano Suspension Bridge, continuing the long tradition of native carving in the park.
Lewis and Carlick both studies under Taltan Tlingit master carver Dempsey Bob. The poles they have carved reflect the traditional skills, stories and artistic forms of their north coast native culture.
As each pole is finished, the carvers raise their pole in a ceremony that combines traditional songs and dances with a spiritual blessing." 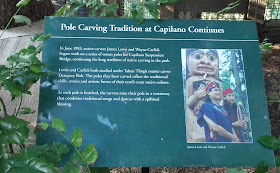 I was thinking about how great looks such a ceremony, but till I'll participate at such an event.... I will return soon to tell you our story about visiting the Capilano Suspension Bridge, and walking on suspended bridges and walkways during the Treetops Adventure and the new addition  Cliffwalk journey.