Autumn is in the air, and what else can be more representative than  freshly harvested apples, changing leaves and a pumpkin patch?
Today was the first day of the 2011 UBC Apple Festival and as volunteers we had the chance to see it  from a different angle.  Here there are pictures behind the scene,  before the start signal of the festivities. 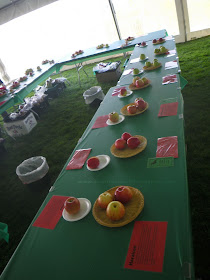 In the Apple Testing Tent more than 60 of heritage or new crossed varieties of apples were available for tasting. We've offered samples of Jubilee, Karin Schneider Kent and Jonagold. The full list of them is available here apples_for_tasting_2011 web.pdf, but I want to mention few of them which I liked more:   Grimmes Golden, Bramley seedling, Ambrosia, Rosu de Cluj, Early Fuji, Honeycrisp, Tentation, Kent, Cox’s Orange Pippin.

The Apple cultivar "Rosu de Cluj" meaning "Red of Cluj" (misspelled "Rosu du Kluj") was obtained in 1966 at Fruit Research Station Cluj-Napoca Romania as a cross between Jonathan and Senator varieties. How do I know? Just because it is one of my favorite Romanian apples ;-)


You know that " An apple a day keeps the doctor away" ... so, see you there tomorrow!